How often is a woman told to embrace her body? A concept, which 25 year old Anne-Marie Kanaan, nicknamed as (AMK) believes is her responsibility to emphasise to young women.

On the 20th of September, 2015, she launched the ‘Embrace Your Body’ campaign and invited young women to send a photo of themselves holding up a sign that says #embraceyourbody. Seven woman aged between 18 and 35 years of age participated in the first campaign. The girls dressed simply and wore red lipstick, in order to symbolise the strength and power which a woman has.

Although this message seems simple, it had a big impact. “It’s so refreshing to scroll through my Instagram and Facebook page and see girls of all shapes and sizes emphasising the message to embrace your body,” says 18-year-old Jenny Toscano.

Anne- Marie Kanaan speaks from her own personal experiences of being a victim of bullying. “My peers would tease me, calling me fat. This level of psychological bullying left me with deep depression” she says.

When Channel 10 news covered the launch of Anne-Marie’s campaign, reporter Jessica Turner reminded viewers that one in eight children are bullied at school.

Grace Humphrey, the mother of three teenage girls, watched Jessica’s report and says “the media constantly portrays beautiful women as blonde, skinny and tall. This is a terrible way to pigeonhole women. But it’s an idea my girls are perpetually exposed to.” 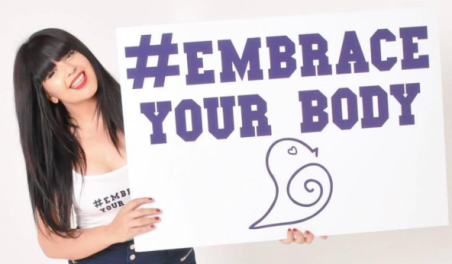 Anne-Marie Kanaan at her Embrace Your Body Campaign

Anne-Marie was very pleased that Channel 10 covered the campaign because she felt a sense of achievement, “all my hard work was getting across to those who needed to hear it.” Following the report, many people responded on Facebook. Women from America, China, England as well as Australia uploaded an image of themselves with the sign in hand.

Pschologist Amanda Leigh says that “the media, video clips and celebrities are slowly shifting the usual storyline of what it takes to be beautiful by reminding women that being a bit curvy is normal. Take celebrities such as Kim Kardashian and Beyonce Knowles. They are both definitely teaching young women to embrace their curves. This has taken many years, but I think it’s finally happening.”

Anne-Marie is now taking her message directly to teenage girls. Visiting schools on a weekly basis, she meets the girls and tells them about her personal experiences. Involving them in her challenge to love themselves, whilst still working out their sense of identity. “At the end of my talk, I am usually swamped by the teenage girls, providing me with appreciative feedback and positive comments. If I can change their perspective on how they view themselves, then I have succeeded in my mission.”

When young sister Krystal experienced anorexia in 2010, Anne-Marie knew she needed to make a change and shift the usual stereotype.

“My sister’s personal ordeal with anorexia, opened up my eyes, to how dangerous external influences on young people can be.” says Anne-Marie. Personal Development high school teacher Helen Bassi says “part of the school syllabus is to teach teenagers about the changes in their body. However, we as teachers realise that it’s easier said than done, because teenagers are so easily influenced with what they’re exposed to.”

“Stereotypes are a difficult thing to break,” says educator and researcher Benjamin Hue. “If females and males are constantly exposed to images of what they should look like, then their subconscious thoughts will always remind them that they don’t look like that.”

Anne-Marie was pleased recently to see the cover of the featured curvaceous model Robyn Lawley, with the coverline “life’s short, I’m going to enjoy my food.”

“The more women embracing their bodies and genetics, the happier we will be as a society.” says Anne-Marie Kanaan.