United through their musical blood Veneno is a four-man band that has a passion to continue the legacy of great Latin music. Lead singer Carlos Velazquez, guitar player Ricky Cancino, bass guitarist Cesar Marin and drummer Steve Marin work closely together to ensure that their love for their culture translates into their music.

These four talented men are from the Western suburbs of Sydney and have loved playing music their entire lives. The band originated with brothers Steve and Cesar and they later welcomed two additional band members, singer Carlos and guitarist Ricky. Although they are not all related by blood, it is very clear that there is a strong connection between these band members and it is all a result of the power and wonders of music. 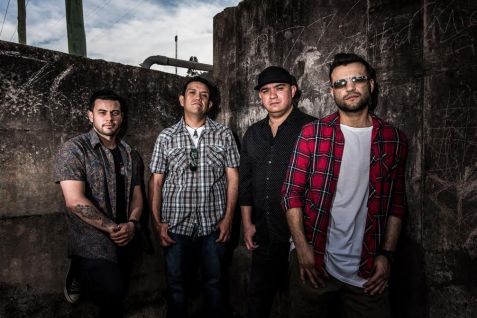 Growing up they were constantly surrounded by the sound of their parents singing and playing Latin music and they would also attend live gigs quite regularly. Both their upbringing and context played a huge role in influencing their musical style.

Veneno is a Spanish word, which translates to venom, and they strongly believe that their music has a “venomous delivery.” They describe their music as a fusion of both Latin and Rock music and once you hear their music it is as though you are instantly transported to South America. The band initially started off in 1998 with their original name as Son Veneno. This varies slightly from their current name as this translates to “they are venom.” The name alludes to the rhythmical style and origins of Salsa music.

When guitarist Ricky was 15 years of age he was with his parents at his local club ‘Marconi’ listening to Son Veneno’s live gig. “I recall saying to myself, one day I will hopefully be that good!” That was the first time Ricky had heard Son Veneno play. Carlos explains “Son Veneno used to have electric guitars, singers rapping and band members jumping up and down. Many people from the older generation were shocked as “Son Veneno really turned heads,” however they were still respectful of the traditions and origins of the music. Songwriter Carlos goes by the stage name C major and he writes most of the lyrics for Veneno in Spanish. The band strongly believe that their lyrics are still very relatable to the Australian culture “because we are Aussies as well!” Our music has a very “venomous delivery” as the music is delivered with intensity.

In 2014, C major worked quite closely with the renowned singer Ricky Martin on the well-known family show, ‘The Voice’. Carlos explains, “The Voice gave me the opportunity to have a better profile and have more extravagant gigs both domestically and internationally.”

The band loves playing music, performing and creating new rhythms together. Carlos reflects on his inspirational process and comically states, “you just don’t know where the inspiration is going to come from. Sometimes it comes when you least expect it! For example, I might be watching TV, going to bed, on the toilet or have had a couple of drinks. That’s how I wrote Conchita!” His advice to other songwriters is to simply write it down or record it. Carlos believes that “music needs to come to you. You can’t go to it, because it has to come to you at a time when you’re ready to receive it.”

Ricky explains, “Freddie Mercury wrote Bohemian Rhapsody all in his head! For me personally, I can have an idea, however, what’s important is to be surrounded by musicians that can build on that idea.”

The band have pushed through many challenges together and have still managed to maintain their great love and passion for music. They plan to continue working hard in order to develop their love and passion for South American music. Veneno really enjoys putting a twist on their cultural music and that’s what allows them to stand out in the Latin music scene, “we believe we are the only Australian Latino band taking it to the next level because we are fusing the different sounds of Australia together.”

Cesar explains, “we have multicultural influences on our music due to living in Australia and that’s why when people in other countries hear us they are so surprised!” Veneno really wants their music to be a natural process filled with passion, in order to “treat the music like the car in the garage. We only want it to have the best engine and we want the best for it.”